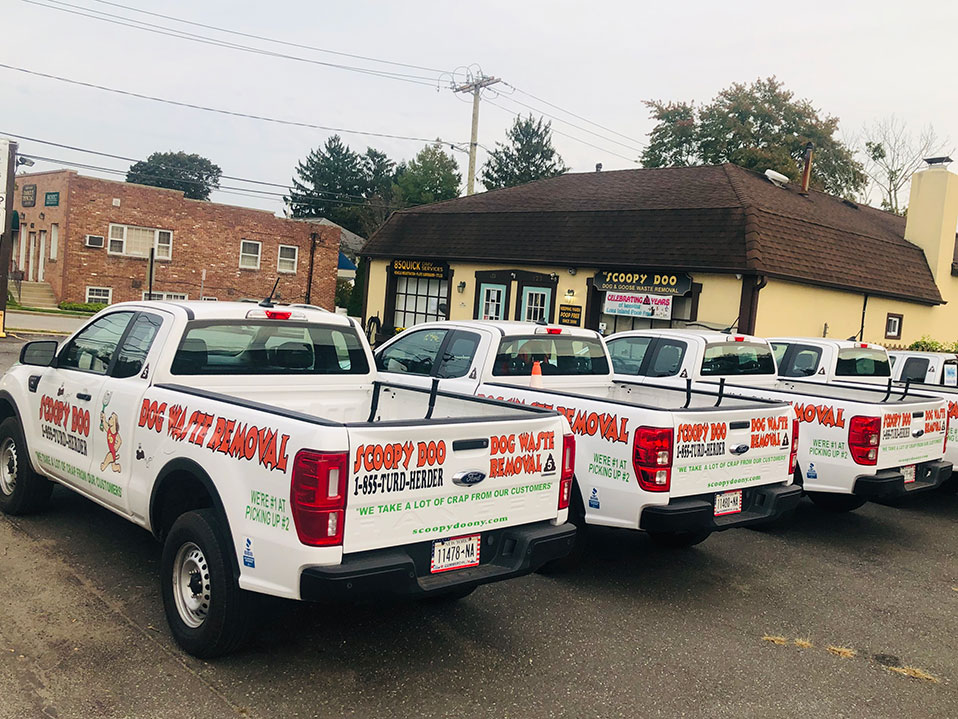 The new trucks have arrived at Scoopy Doo!

Having established itself as the premiere poop-scooping service in the tri-state area, Scoopy Doo could be forgiven for sitting back and resting on its laurels. But instead, we’re getting bigger and better, with the addition of five brand-new trucks to the Scoopy fleet!
Scoopy Doo Pet Waste Removal Service has been in operation since 2000, with its main office in Locust Valley NY, and serving customers in Long Island, Westchester, and upstate New York. Jim Coniglione, the founder and owner of Scoopy Doo, started the business with just one truck, a bucket, and a dream. Twenty years later, he sits atop the poop-scooping world, with a fleet of ten trucks and a team of dedicated technicians fanning out around the New York region every day to keep the lawns and parks clean and poop-free.
Scoopy Doo has gone through many trucks in those twenty years. They all had a story to tell, and many of them are fondly remembered by their classic nicknames – Purple Haze, Black Betty, Whitey Ford, Francine, Shirley. Red Rosie…They all served us well, as did their contemporary counterparts, such as Old Yeller and Big Mike, who are still making the rounds and valiantly answering the call.
But time marches on, and the time has come to significantly upgrade the fleet. So we’re excited to announce that five brand-new 2021 Ford Rangers have been added to the Scoopy Doo family, and some are already on the road. They have been fitted out with state-of-the-art GPS technology, and will soon be wrapped with the distinctive company logos and inimitable Scoopy Doo catch-phrases (such as “We’re Number One at Picking Up Number Two” and “We take a lotta crap from our customers”). Jim holds to the credo that the secret ingredient of any business success is a sense of humor, and he wants that sense of fun to reach out to anyone who spots a Scoopy Doo truck driving by. If you can’t laugh at poop, what can you laugh at?
Nevertheless, we also treat our customers’ concerns with ultra-seriousness and a deep sense of responsibility. And with these powerful, dependable trucks on the road, Scoopy Doo will now be able to serve those customers even better than ever!

Thanks for coming to NY

I just returned home from spending 3 days with the King of Poop, Jim Coniglione. I can’t even express how refreshing it was to pause and take a step back from my business for a few days and learn how someone else is doing it. If you think you have it all figured out, I promise, you don’t. You need to constantly be learning and trying to improve your business.
Jim has been at this for almost 20 years and it shows. His office is a well-oiled machine and some of the things that I learned from him, only come from experience in this industry. His staff is amazing and they all know their

No matter where you are in your business, you can learn something from this guy. He has a heart of gold and is as genuine as they come. I would highly encourage anyone to reach out to him if you are interested in improving your business. If you hate to laugh, are a negative person or think you have it all figured out, I wouldn’t waste your time because you’ll be miserably filled with laughter and positivity.
Now that I am feeling refreshed and motivated, it’s time to get to work and make some changes. Happy Thursday everyone!
Sully is pretty pumped to have me back home and working. He enjoys the freedom this business gives our family and that he gets to hang out with me most days.
Thanks, Jim! — feeling motivated.

Jim Coniglione’s a real character. Literally: Owner of the Scoopy Doo dog-waste disposal service in Locust Valley, he appears as an extra in the Netflix film “The Week of” (“Fat Italian Wedding Guest”) and Martin Scorsese’s upcoming “The Irishman” (“Teamster”), according to the businessman’s IMDb page. A self-described “entre-manure,” he also dabbles in screenwriting, YouTube videos, and reality-TV series, including Discovery’s new “Sticker Shock,” in which folks get their vintage cars appraised — an antique roadster show, if you will. Coniglione and his 1970 VW Dune Buggy appear on the episode airing Wednesday at 10 p.m.

“I love him — how could you not?” asks appraiser Randy Carlson, who judges whether Coniglione’s vehicle is a coveted Meyers Manx, the first dune buggies with fiberglass bodies. “Such energy — he’s so positive. A real super-fun guy,” Carlson says of the Glen Cove born-and-raised 52-year-old, who owned a tire store before cornering the dog-dung market. “Fun both on and off the set. He’s awesome.”

Take Coniglione’s story about how he got the Dune Buggy. “My doctor, Charlie Gambino, said, ‘You’re too fat!’ So I start walkin’ around” for exercise near his business. Four doors down he saw a Dune Buggy in a home’s garage. “And I go crazy because I love dune buggies! And it’s orange — and I love orange! I put a sticky note on [the owner’s] front door.” You carry sticky notes when you go for walks? “It was close to the office, so I went back to get sticky. It turned out it was my old mailman from my tire shop! It was sitting outside for, like, seven years. It was in bad shape.”

He bought it for $1,500 and spent a few thousand fixing it up. And while Carlson cautions that dune buggies are “probably one of the least-safe vehicles on the planet, a piece of plastic on a tin [Volkswagen] chassis. In an accident, you are the crumple zone,” Coniglione isn’t deterred from driving it.

“I go everywhere with this thing!” he enthuses. “I’m all over. I drove it up to Bear Mountain, to the Volkswagen festival out there. It passed New York State inspection. They’re a little scared out there in California,” where the appraiser lives, Coniglione jokingly suggests. “This is New York!”

Indeed: His family has lived in Glen Cove for four generations, having emigrated from Saturno, Italy, in the Campania region, and Licodia Eubea, Sicily. One great-grandfather worked for the railroad, one grandfather for Grumman, Coniglione says. “My dad was in the electronics field, a production manager, and my mom worked in the Glen Cove school system,” where Coniglione graduated from high school before going on to a business degree from SUNY Delhi.

His wife, Kathy, and their 14-year-old daughter, Jamie, might soon be able to say Coniglione worked not just in business but in reality TV. “We filmed a pilot [about Scoopy Doo] for Animal Planet four years ago, then they got cold feet because the new CEO thought maybe somebody will be turned off by poo,” he believes. “So we were approached by a new production company out of L.A., and we’re in the process now of developing a new reality show.”

One can only hope that, ahem, it gets picked up.

There’s always news breaking about Scoopy Doo Pet Waste Removal Service! – because here at Scoopy Doo we’re always deeply involved in community affairs, animal causes, and technology innovations. Owner Jim Coniglione has been a tireless and enthusiastic promoter for the poop-scooping business – a turd-will ambassador, so to speak – and his message has been picked up by news outlets throughout the tri-state area. Scoopy Doo has been featured in print and online publications such as the New York Times, the Wall Street Journal, and The Huffington Post, as well as news stations such as CNBC and News 12 Long Island!